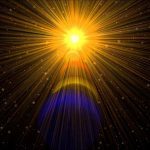 The magical system of Olympic spirits gives you a way of asking the universe for something they are not organizing about. You cannot threaten them or do anything which is a usual instrument of magic. You are getting in touch with one of the prime forces in the universe and the most powerful source of magic. However they act according to their own will and according to their own plans. In some cases they will not give you want you want, and in other cases they will let you have it even if itis not recommended. Gods are like that.

You can meditate on the Och Empowerments and use it for clearing your path of abundance and communication between your inner self and higher self and more applications of use. you can be guided.

If the seven rays are the seven archetypal Gods from which all metaphysics is based, then The Olympic Spirits are remains of the divine union, as we are, and therefore must be brought together in the mind of the Magician as part of the journey home.

Remember that the Olympic spirit is the archetype of all Gods and Goddesses which are part of that ray.They are there to provide you with guidance on your life path.

WHAT YOU WILL RECEIVE:
– distance attunement
– manual
– bonus manuals including information about chakras, auras, psychic self development, etc
– certificate

PLUS – you can pass this wonderful energy onto others!!

I ‘saw’ all of my animal family who have gone to the bridge and asked for their help to communicate with animals. I also could see a pulsating ball of light which changed from purple to green.

I have been working with the Archangels that was really different for me and quite lovely. The dragon and Lion reiki was so fun and I also have enjoyed working with that energy. I have always resonated with dragons as they are my mythical spirit animal…Black panther and Elephant are my guides and totem animals…

Thank you for the attunement today! It was a wonderful experience. I have felt a deeper connection to Nwfre. Thank you so much

The energies are so amazing. For the first attunement, immediately I called in the energy I felt tingling on my third eye chakra and later a rush of electric energy through my whole body after which I fell asleep. For the Master, I have not much to say because I slept off but felt exhausted after waking.

When I were receiving the Auto Immune Desease Healing Attunement, I felt the most wonderfull lifting vibration that intervened in different old energy layers in different organs (specially felt in the liver). Also some flickering effect in my mind. I have had psoriasis (skin desease and arthritis) in years now, but I really feel that I have found a effective solution for this.

I have called in my attunements last week and received immensely beautiful visions of colour that brought with them a calming, cleansing energy during the meditation. I am blessed with the crystal skull energies and have been very connected to carved skulls for years but not realised why until I met you. I am guardian to a few powerful Dragonsblood  Jasper, Lapis Lazuli and  Presili Bluestone carved skulls They all have names that they have channelled through me and they have now guided me …

I did purchase Owl attunement reiki from yourself and have received the attunement. Thanks a lot for the attunement. I had a really great experience. A white owl sat on my shoulder and on my request it did sit on my left hand so I could pamper him. I could see a house surrounded by snowy mountains on a winter night. The owl healed my throat chakra. I could see the owl’s yellow eyes and its blink. The owl then sat on my head and released all the negativity from my pineal gland. I felt as if my…

I received the chi ball attunements this afternoon, between noon and 1pm. A truly great experience. I called in guides after I did a Hatsurei. For every new ball it was an intense light building around me, and it tickled inside all of me, head to toes. I could also feel the chakras working and there was a spirit there the whole time, working on my crown and third eye. At times my brain was bulging and the temple chakras went mad

and as I got into it

This morning of April 14, 2020 I brought in the Attunement and your Chi Ball for the Healing Sacred Sound Frequencies Master Reiki by Manuela Fasoli.
It was a lovely experience, beautiful light and energies. I experienced sharp pain below the heart region/diaphram and a lot of sadness around being silenced was released. I am grateful for this gift and for this beautiful healing tool.

By Manuela Fasoli Sometime people lie, often because they’re afraid  to be judged or not loved, a[...]

By Manuela Fasoli Raphael serious desease healing booster system has two symbols and comes from A[...]

Protection From All Dangers Reiki

By Manuela Fasoli We’re always, first or later, under some risk of danger that may be visible or [...]

By Manuela Fasoli Protected Pregnancy Reiki system comes from the source and our beloved Archange[...]

By Manuela Fasoli This energy system helps us to be much more protected from all pandemic desease[...]

By Manuela Fasoli Larah is a white witch of light very powerful as a healer. Her magick energy ca[...]

By Manuela Fasoli This energy helps you to wash away  negative energies  and bad entities from ou[...]

Any cookies that may not be particularly necessary for the website to function and is used specifically to collect user personal data via analytics, ads, other embedded contents are termed as non-necessary cookies. It is mandatory to procure user consent prior to running these cookies on your website.