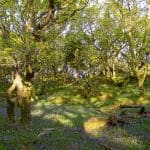 Sacred Earth Chakras is a system of loving natural attunements to help connect you with Mother Earth and expand the loving energy eveyrwhere. The system is divided into 3 manuals – sacred chakras, spinner wheels and serpent energies.

This the first of the three attunements. It contains 7 attunements that correspond to each of the earth’s chakras and each of our 7 major chakras.

A long time ago before the ancient wisdom of the pagan and indigenous peoples were largely wiped off the map, people KNEW that the Earth was a living being. This wasn’t something they intellectually discerned. It was self-evident. Of course, people were living more closely within the Earth’s embrace at that time, depending upon her for food, shelter, and so forth. And their survival was much more intimately connected with the flow of the seasons, the weather, and the cycles of the Earth. So they had some major motivation to get to know her and to understand what she was all about. But the Earth herself is her own entity. She communicates in a different way than the trees and rocks and so forth. The Human body has its chakra system and the Earth, as a living entity, also has her own chakra system. The earth’s chakra system is asd follows:

This is the second of the three attunement and it also contains 7 attunements. These correspond to the four spinner wheels and three centres.

Spinner Wheels are major sacred site areas which generate the four alchemical forces symbolised by fire, air, water and earth.The spinner wheels are vortices for the four elements. They are called spinner wheels because the earth energies emanate from them in either a spinning clockwise or anticlockwise motion. Due to this movement, the influence for change generated from any of these four areas extends to a greater distance than other sacred sites.

The Rainbow Serpent and The Plumed Serpent

This is the last in the trilogy of attunements

Combined, the path of the Rainbow Serpent and the path of the Plumed Serpent, runs right around the earth. They link up to form a pathway through all of the sacred earth Chakras.

This is a beautiful system of attunements and makes us feel humble and connected.

WHAT YOU WILL RECEIVE:
– distance attunement
– 3 manuals
– bonus manuals including information about chakras, auras, psychic self development, etc
– certificate

PLUS – you can pass this wonderful energy onto others!!

Price is for all levels

This morning of April 14, 2020 I brought in the Attunement and your Chi Ball for the Healing Sacred Sound Frequencies Master Reiki by Manuela Fasoli.
It was a lovely experience, beautiful light and energies. I experienced sharp pain below the heart region/diaphram and a lot of sadness around being silenced was released. I am grateful for this gift and for this beautiful healing tool.

I have called in my attunements last week and received immensely beautiful visions of colour that brought with them a calming, cleansing energy during the meditation. I am blessed with the crystal skull energies and have been very connected to carved skulls for years but not realised why until I met you. I am guardian to a few powerful Dragonsblood  Jasper, Lapis Lazuli and  Presili Bluestone carved skulls They all have names that they have channelled through me and they have now guided me …

I received the chi ball attunements this afternoon, between noon and 1pm. A truly great experience. I called in guides after I did a Hatsurei. For every new ball it was an intense light building around me, and it tickled inside all of me, head to toes. I could also feel the chakras working and there was a spirit there the whole time, working on my crown and third eye. At times my brain was bulging and the temple chakras went mad

and as I got into it

As I called in the chi ball, I felt as if I had grown – not sure what to call them – strings, that went out from me into all directions (it was a very interesting experience). Today I actually feel clearer – I cannot put my fingers on it how, but I feel as if I did not know that the glass I was looking through was dirty, until it was cleaned.

Thank you for the attunement today! It was a wonderful experience. I have felt a deeper connection to Nwfre. Thank you so much

Thank you for the most relaxing attunement which I received this afternoon in my nest seat in the garden. The crystalline green ray I received through your chi ball was so gentle and abundant, feeling the wind and sun on me whilst relaxing and connecting in the quiet with the elementals amongst the greenery, and many dandelions and bluebells in the garden. It was a most peaceful experience. Thank you.

I ‘saw’ all of my animal family who have gone to the bridge and asked for their help to communicate with animals. I also could see a pulsating ball of light which changed from purple to green.

I feel blessed by the attunements.
The grandmother moon wrapped me in his light.
With the golden ankh, I could open a door to a prosperous future. It’s an access key.
Morgan’s crow sent me messages that I needed right now.
The labyrinth allowed me to find the way out of an issue that worried me.
And the amulets of Kemet gave me a lot of strength.
Thank u very much.

By Manuela Fasoli Sometime people lie, often because they’re afraid  to be judged or not loved, a[...]

By Manuela Fasoli Raphael serious desease healing booster system has two symbols and comes from A[...]

Protection From All Dangers Reiki

By Manuela Fasoli We’re always, first or later, under some risk of danger that may be visible or [...]

By Manuela Fasoli Protected Pregnancy Reiki system comes from the source and our beloved Archange[...]

By Manuela Fasoli This energy system helps us to be much more protected from all pandemic desease[...]

By Manuela Fasoli Larah is a white witch of light very powerful as a healer. Her magick energy ca[...]

By Manuela Fasoli This energy helps you to wash away  negative energies  and bad entities from ou[...]

Any cookies that may not be particularly necessary for the website to function and is used specifically to collect user personal data via analytics, ads, other embedded contents are termed as non-necessary cookies. It is mandatory to procure user consent prior to running these cookies on your website.